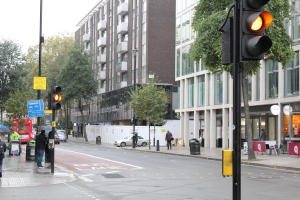 I was asked to inspect the building and prepare a report on the fire resistance of the concrete floor separating shops from offices above as there were some doubts as to the acceptance of the amount of concrete cover to the reinforcing steel bars measured by specialist contractor Sandberg. The owner wished to let the retail units after the removal of an existing ancient sprinkler installation. Building Control believed that the amount of fire resistance possessed by the floor might be inadequate to resist a non-sprinklered fire.

I examined the Sandberg report and, taking account of likely fire loads and ventilation conditions and full scale experimental work on fire severity in large compartments I had done earlier at the Fire Research Station, I concluded that the concrete cover to the main rebars was adequate to provide a fire resistance of approximately 90 minutes which would survive a burn-out. The alternative was to apply a fire protecting board/spray over the soffit or insist that tenants install sprinklers from the water main terminated at the boundary of their unit. Sprinklers would reduce the fire severity and also reduce damage by flame and radiation to the facade above the ground floor from fire effluent coming out of the storey of fire origin. My fire safety engineering report recommended that the floor soffit could be left bare in the absence of sprinklers and was submitted to the LFB by the building control officer.