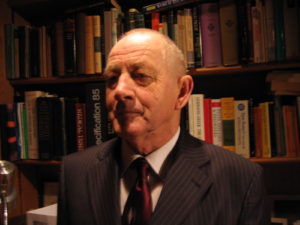 My practice is small and this means that every job gets my personal attention. I am very well qualified, both academically and professionally. I have a massive fund of fire safety research, testing and experience having had the benefit of twenty years experience working at the Building Research Establishment’s Fire Research Station (the UK government’s centre of excellence), and over twenty years subsequently as an independent fire safety consultant based in London.

My projects show that I have been involved in very large fire safety engineered projects (value more than £100million), eg Tally Ho redevelopment, as a checking authority for a major London Local Authority (responsible from project inception to handover), and small residential projects. I am able to make and audit smoke control calculations and calculations for fire spread between buildings. 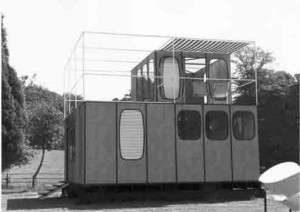 My design of frameless sandwich panel construction used in gazebo.

After completing a 5 year engineering apprenticeship with Bristol Aircraft Company and ICI, I designed and patented a 2-storey frameless steel building (British Iron and Steel Research Association) to illustrate the structural use of sheet steel, undertook product development work on rigid polyurethane foams in buildings (Dunlop Rubber Company), and guided research/design on an industrialised housing system using steel (IBIS project jointly funded by RTB and Pressed Steel Company). I then researched the behaviour of steel structures in fire (BISRA and Fire Research Station).

I joined a large London firm of consulting engineers (Pell Frischmann and Partners) where I became Chief Engineer of the Building Services Department responsible for 35 design engineers and contract control, and became a Partner of Pell Morch and Partners working on the Nottingham combined district heating and refuse incineration project. Thus I acquired experience of major building contract management and contractual trouble-shooting, design team working, preparation of project proposals, and knowledge of the wide range of skills in multi-disciplinary consulting engineering practice, all vital background for later freelance work.

Deciding to specialise in fire I joined the government’s Fire Research Station at BorehamWood (part of the government Building Research Establishment) in 1975 and pursued a number of research, consultancy and management roles associated with fire and buildings. I was Head of the Fire Advisory Service, Head of the Regulations and Codes Section, Head of the Structural Safety in Fire Section, Acting Head of Fire and Materials Division (responsible for 25 staff working on toxicity, fire modelling, smoke control, materials flammability, and development of tests), and Acting Head of Fire Protection Division (responsible for 25 staff working on fire control and extinction, industrial hazards, protection engineering, structural safety, fire engineering and fire regulations). 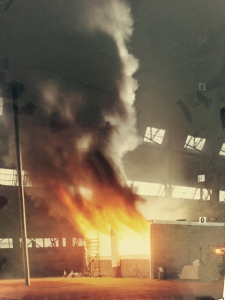 I obtained a doctorate in structural fire engineering in 1987 and was awarded Personal Promotion at Building Research Establishment in 1988 allowing me to undertake important work on European harmonisation and fire safety engineering free of management duties- this work  included  the planning and conduct of a programme of large-scale fire compartment fire severity tests designed to check the equations in the structural Eurocode (see my Publications), and I was Technical Secretary on the European committee advising on the fire parts of the Construction Products Regulations. I was also  pursuing high-profile consultancy as the Station’s Principal Fire Protection Consultant.

In 1995 I set up as a Fire Safety Consultant in London while remaining actively involved in national and international committees concerned with fire safety engineering and fire precautions in buildings. Sponsored research has included the development of assessment techniques for long-span structural sandwich panels exposed to fire. Most current work is in the commercial and residential sector, involving fire safety strategies, fire risk assessments and fire problem solving. I am concerned with all aspects of fire safety, especially for those buildings for which the prescriptive rules are inappropriate.

I work on an hourly fee rate and charge VAT at 20%. Office overhead is 5% of fee. I do no speculative work and rarely any fixed fee work.  I request payment within 14 days of submitting an invoice and, where appropriate, stage payments. Although I work mostly on my own, I am content to work with other fire consultants if the project merits it – past examples are the Millennium dome (the biggest dome in the world and now the O2 Centre in London) and the Houses of Parliament, Westminster.

Hobbies and Pastimes – past and present

I have had a lifelong interest in the water – swimming, sailing, rowing – and was brought up in a large family sailing in the treacherous and exciting muddy waters of the Brisol Channel. I earned enough money in school holidays working on the mystery train (then called I think  the ‘Chattanooga scho scho’) which ran round the end of the Grand Pier at Weston-super-Mare to buy the materials for building my first sailing dinghy, a GP14 – I have built a couple of sailing boats since and was a keen competitive dinghy sailor – before I got married and had children!

In the late 1950’s I captained the University of Wales (four constituent colleges of Cardiff, Bangor, Aberystwyth and Swansea) sailing team and sailed against many other university teams in different parts of the country, sailing National 12’s, Firefly’s and GP 14’s. One year I was University of Wales sailing champion and I was also captain and treasurer of the Cardiff University saliing club, and – a dubious honour – captain of the Engineer’s hockey team. 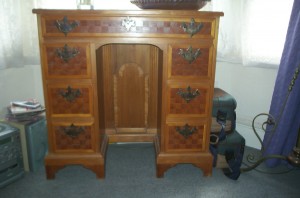 My design of Queen Anne kneehole desk I made from parana pine using hand tools, 1980’s.

have made furniture in neo-classical styles with simple hand tools, and most is now in my children’s homes My handmade furniture etc. I have also plastered and ‘done up’ too many delapidated houses in London. 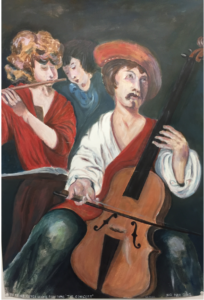 My oil sketch of a Sir Peter Lely painting taken from a postcard.

My current hobbies are sketching my sketches 2014 (14Mb) gordons portrait sketches 25 August 2015 a new field of endeavour, sculpture Clay sculpture of my head Dec 2013, Easter island man, king kong and vase making by unorthodox means vase gc1 pdf, rowing on the river Thames and boating on French rivers. Oh, and I like Billy Holiday, Amy Winehouse and Bach (JS) and Joseph Conrad and …….