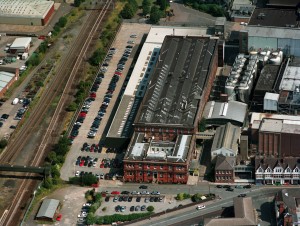 This three-storey building was constructed in the mid 19th century as a brewery. It is very robust and structurally over-designed for its new speculative use which includes the upper storey as offices of variable size. It is approximately 120m long by 32m wide. The external walls are 70cm (27inches) thick. Circular hollow cast iron columns are placed on an 8m grid. The cast iron roof beams span 8m between columns and have openings in the web, and the lower flange is in the shape of an arch.

The client sought advice on different options as he saw them – to sandblast the columns and beams back to their original state, then paint with intumescent paint to suit, or to leave existing paint on the structural elements, make good and paint over.

After examining the plans and photos of the wonderful cast iron beams it was clear that they should be left exposed if at all possible. I was given a copy of Optima’s provisional fire strategy report so that I had a holistic view of all fire precautions and means of escape etc. I met the client and we discussed my ideas. I had considered the principles underlying the fire regulations (I had been the BRE nominated expert advising the government’s Building Regulations Advisory Committee in my previous work at the BRE Fire Research Station) and concluded that no fire protection was needed in the upper storey roof structure as neither the regulations or Approved Document B require or recommend that a roof needs to possess fire resistance in these particular circumstances. Sometimes the external wall has to possess fire resistance in order to reduce transmitted radiation from a burning building to a site boundary or building nearby and this would apply equally to the upper and lower storeys. Again fire resistance in the external wall could be necessary to lower the possibility of fire travelling up the outside of a building. However, the subject building has none of these features; it is spaced well away from other buildings, is higher than the 2-storey existing attached offices, and does not use the roof as an escape route. Some minor recommendations were made on other structural matters.