All flats require, under the Building Regulations 2013, to have boundaries (ie walls and floors) possessing one hour fire resistance. This is assessed in a severe furnace test BS 476 Part 8 or equivalent BS EN and the furnace fire severity represents fire after flashover in a room with combustion gas temperatures rising to 1000 degC. The question here was ‘Does the offset party wall and floor construction provide one hour separation between flats as required under building regulations?’ 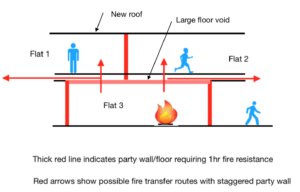 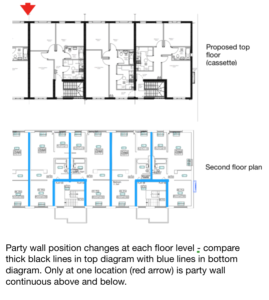 Prefabricated steel cassettes had been used to form an additional storey while leaving the existing flat roof in place. The horizontal portion of the party floor separating two flats in this project was complicated by the retention of the flat roof construction.The effect of offsetting is a) to result in portions of the party floor having doubtful fire separating ability due to thermal distortions in a fire, and b) to require the floor void to have complex cavity barriers to provide continuity of fire resistance.
I prepared a report describing the hazards and recommending against the concept of staggered party walls in future.
Client: Philip Pank Partnership, London