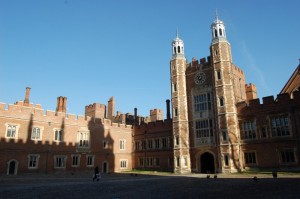 The client wished to have an independent assessment of the current archives strong room which formed part of this prestigious and important building. The strong room, which was of massive construction, contained some very valuable documents including a priceless copy of the Guttenberg bible. The assessment, instigated by the insurer, would need to cover not only fire integrity in terms of fire resistance (ability to resist a 2-hour standard fire resistance exposure) from outside the room but also structural impact arising from any source.  I made a site survey in the company of one of the College’s building surveyors and made recommendations after accessing ancient drawings of the original construction including the safe strong room door. I found a) that the room could be expected to have the target fire performance and could be expected to resist any plausible natural accidental fire in spaces immediately adjacent to the strong room, and b) that there is little chance of the structural integrity of the strong room being jeopardized from the collapse of adjoining construction such as the library above or the immediately adjacent Luptons Tower as a result of fire in those spaces. Suggestions were made for further minor inspections and improvements in the construction and equipment

Client: one of the Building Surveyors, Eton College, Eton 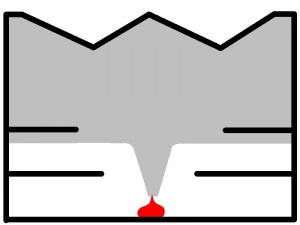 The open quadrangle surrounded by the existing 3-storey buildings was to be roofed over to form an atrium nominally 35m square by 15m high which communicated with corridors in the existing building on all four sides, and this would attract the need for smoke management and a review of the impact of roofing over on existing means of escape and compartmentation and the incorporation of disabled refuges. The work involved checking, on behalf of building control, the fire safety strategy prepared by the fire consultants, calling for more information, requesting particular attention be paid to existing basement storage areas and checking the smoke control calculations for design fires on the floor of the atrium, both in the open and under a balcony, for which I made my own calculations according to BS DD 240. The review also covered fire fighting access and facilities, smoke detection and alarms, and emergency lighting. Because of the heavy work load on building control at the time I also reviewed the acoustic consultants’ modelling of the acoustic reverberation time for the atrium. Architects were BPR, London. Fire consultants were LWF. 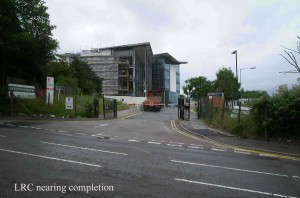 I was consultant to the Building Control Department to check and amend, at a late stage, the fire safety strategy proposed by the fire consultant, the design, and parts of the construction of this new educational complex containing a three-storey atrium open to the accommodation and extensive areas of external glazing. The building was sited very close to an existing building within the same ownership and part of my brief was to prepare calculations of radiation to the nearby building and suggest a remedy – the extension of a fire wall into the roof space and upgrading of the existing fire wall below in the nearby building so forming compartmentation. Architects were BPR. 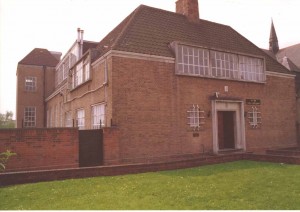 Working with the architect, Steven Adams Architects, the brief was mainly to clarify how the two different parts of the building, new and old, would be evacuated under different combinations of use, and help justify the eventual design for building control approval. This required clarification of occupant numbers and distribution, means of escape and an improvement to compartmentation and giving guidance on the preparation of a fire safety manual.

Advice on design of suspended ceilings having a change of slope.