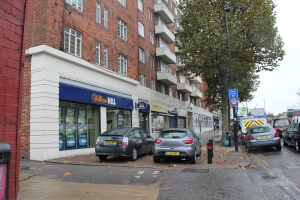 The building is a detached 1930s purpose built block of flats arranged over 7 storeys. The ground floor is commercial and the upper floors, the subject of my work, are residential flats. A fire risk assessment had already been made on the building but the client believed that some of the recommendations for improvement were impracticable and wished to have a second opinion. I inspected the building in the company of my client and officers of the London Fire Brigade and provisionally agreed with the officers that a stay in place strategy seemed appropriate

This strategy assumes that the flats are of robust compartmented construction such that fully developed fire would be contained within the flat of fire origin and it would therefore be safe for occupants of other flats to remain in their flats until the fire service arrived to fight the fire and help them out of the building. It also assumes that the fire service attendance time is short and is aware of this strategy.

In the residential part of the building there were three escape stairways sensibly placed and connected by central corridors providing access to the flats. However these corridors were undivided and approximately 45-50m long. Hence, simply from the fire fighting point of view, the building was an unacceptable risk to fire fighters for their search and rescue activities. It was agreed that a number of fire doors should be installed in the corridors and that flat entrance doors which unavoidably communicated with a stairwell should have their fire resistance and smoke stopping characteristics improved, etc.

Other aspects of the design were considered in a holistic way, and it was recommended that a fire safety strategy report be drawn up for record purposes and as a guide for management and an aid to the fire service. Suggestions were made on priority of remedial work which included a check to ensure there were no substantial cavities communicating between flats through which fire effluent could pass.