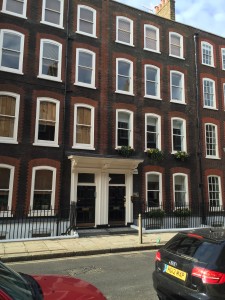 assessment of the building following the conversion and refurbishment of this splendid Grade 11 listed building which now included 4 new flats. The building had gained building control approval but the local fire officer recommended that a fire safety engineer be appointed to examine and report on the proprietary local fire suppression system installed in the refurbished flats on ground and upper floors designed to compensate for a single escape stair and the fact that the timber panelling of the staircase was listed and could not be touched. The fire officer was also concerned that electric cooking hobs (normally regarded as a fire hazard), were located near the flat entrance door in some of the flats so that fire on a hob, e.g. chip-pan fire, could discourage occupants from exiting the flat.

To comment on the fire hazard in a building one needs to have a clear holistic understanding of how the building works in terms of passive and active fire precautions and possible occupant behaviour. The layout of this building was complicated having previously been two 4-storey houses with two staircases, but it became clear that occupants of upper storey flats had to use one of the two staircases over a three storey height. It was not possible to instal lobbies and because of Listing constraints it was not possible to upgrade the fire resistance of the flat entrance doors by conventional means. It was however possible to upgrade the fire resistance of the bedroom partitions separating the room from the staircase by the application of an intumescing layer on the risk side, and this was done in the new flats.

In summary, before my involvement, the designers, building control authority and building owner had done as much as was reasonably practicable to provide fire safety. Yes, there were some unresolved code non-compliances, for example the small bedrooms were inner rooms and the local fire suppression system would only protect the adjacent sitting room (a residential sprinkler system would cover all the occupied rooms not just the sitting room but was impossible to install due to disruptions to the listed finishes and aesthetics). To compensate, stand-alone paired smoke alarms would give early warning of fire in either room (sitting room or bedroom) within a flat allowing escape through the access room and onto the staircase. Parts of the building were used as offices and this mixed use required a BS 5839 Part 1 fire detection and alarm system set so that fire detected anywhere in the building would cause all sounders to operate and the fire plan required that evacuation would be simultaneous.

I return to the fire officers concern over the use of a local fire suppression system in each new flat. I inspected the building on two occasions and observed that the standard of workmanship and housekeeping was excellent. There was one room where a fire could potentially develop without being suppressed by the water mist and this was where there was structural shielding of the mist nozzle, but this was in the uppermost flat and occupants would not be required to escape past the room in question. In another case the water mist nozzle was located on a worktop and it could be obstructed in a way that a ceiling or wall mounted sprinkler head could not be so obstructed. However, sprinkler sprays are not swept up in the fire plume as in a water mist activation because of the mist droplet size, and so one could argue that some shielding or obstruction is allowed for in a mist system. Maintenance of the water mist systems in these flats would be undertaken by an approved engineer but managed by the estates management company and site evidence was that the company was a responsible company in this regard. The client had relocated the electric cooking hobs so that they were a minimum hazard to occupants, and this had dealt with one of the fire officer’s concerns.

Could anything else be done to improve fire safety in the building? Yes, the flat entrance doors could be fitted with automatic door closers and fire and smoke seals inserted in the door edges: the client had assumed that this work would not be allowed under Listing constraints. I confirmed with the local conservation officer that he was content that this additional work should be done. Also the fire notice in each flat should mention the need not to obstruct mist nozzles.

I did not share the concern of the local fire officer that the mist system might be inadequate for, though the bedrooms were not water mist protected, these rooms were small and the travel distance was correspondingly small, and there were stand alone smoke detectors in sitting room and bedroom so advance warning would be given of incipient fire anywhere within the flat, and with regard to maintenance it seemed that the building owner was managing the building well.

With most fire risk assessments it is necessary to have current as-installed drawings as part of the report. Often variations in the construction contract lead to modifications which are not always recorded, and though it may be tedious to the Responsible Person to get these drawings made/updated it is considered essential, but is often overlooked once the construction phase is complete and the designer has moved onto another project. In this project the management company produced an excellent set of as-installed drawings showing all the salient fire precautions.