Following receipt of a fire safety enforcement notice from the LFEPA my building management client asked me for a professional opinion  a) on the need to fire protect the external steelwork on this residential building and b) if the extensive external timber cladding on the building needed to have treatment to improve the resistance to spread of flame. The building was 6 storeys and had, on one face, external open-to-the-air timber walkways supported on unprotected steel balconies which formed the access and egress routes for the flats. 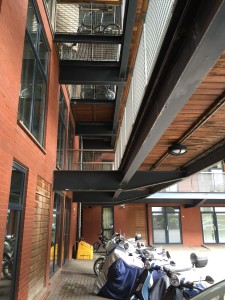 Stay in place strategy
The building appeared to rely on a stay in place strategy as there was no fire detection and alarm system installed i.e. flat occupants should stay in their flat should fire occur elsewhere in the building and wait for the fire service to manage the evacuation. A stay-in-place strategy normally assumes good fire compartmentation, protected escape routes and good access for the fire service. It does not, in my opinion, allow for a multiple fire scenario which appears possible in this building where fire could easily spread vertically via the timber cladding on both faces and in which there is no internal protected escape route.

The external timber cladding
Addressing the external timber cladding question raised by the LFEPA, I opined that the external softwood timber cladding (‘clapboard siding’) of the ‘courtyards’ of the building is regarded as an unacceptable fire hazard and it should be treated with a weather resistant coating to achieve at least Class 1 in the BS 476 surface spread of flame test or it should be replaced by a material preferably substantially non-combustible e.g. fibre cement. The context is such that flames jetting through a window could lead to rapid flame spread upwards into the zone where fire fighters may be at work or occupants may be staying in place; flame spread is exacerbated in a re-entrant corner condition where feed-back radiation from the flames leads to increased burning rate. It is noted that BRE have a test rig for assessing upward flame spread – see BRE report BR 135 and there is also BS 8414 parts 1 and 2, and examination of these documents provides further justification for upgrading this construction. Burning timber gives off large amounts of smoke and this could be life threatening especially if flat occupants decided, against the assumed strategy and fire plan, to leave the building via the open balconies. 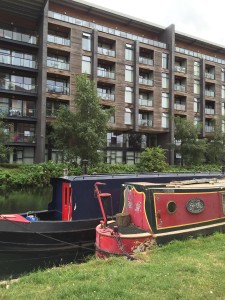 Timber cladding on the face of part of the building complex. No external horizontal balcony walkways on this face.

It is noted that timber cladding is present on both the front and rear faces of parts of the building and although there are is no escape route on one face, there is equally a likelyhood of rapid fire spread up these faces. Ideally all faces of the building should have the softwood timber cladding replaced or treated because of the stay-in-place strategy, unless sprinklers are installed in flats. Further thought is needed here to decide if the fire effluent rising up the face of a block arising from a fire in a flat would be much less than the fire effluent from the flat contents and fire involving the cladding. Clearly the fire service should not be faced by a widespread fire due to the contribution from the cladding when there may be more than 100 people at risk in their flats. It might be asked ‘Why was this problem not identified in the original design’ and it could be that the original design, which did not contain a sleeping risk, was deemed acceptable, but, in my opinion, it is not considered acceptable now.

Fire in a flat.
The most dangerous scenario is considered to be a fire in a flat which goes beyond flashover and leads to jetting flames from windows front and back when the glazing has failed. This would be very frightening to occupants of adjoining flats especially above the flat of fire origin. Fire in the flat could rapidly spread up the face of the building placing the balcony escape at risk (either being engulfed in flame or further up the building shrouding the escape routes in smoke). The fire service might have a difficult job trying to rescue those occupants that had obeyed the guidance to stay put and at the same time bring about fire fighting from below if the timber balcony walkways and the timber cladding of the facade also became involved in fire. It has already been noted that untreated softwood has a high (poor) surface spread of flame rating. It is for this reason that the author strongly recommended the installation of automatic sprinklers in each flat. These could be designed and installed to BS 9251: 2005 – Sprinkler Systems for Residential and Domestic Occupancies. Retrofit sprinklers have been adopted in a number of low rise and high rise flats and it is to be noted that they run off the normal domestic water supply and do not need large storage tanks and duplicate sprinkler pumps like a commercial sprinkler installation designed to BS EN 12845. Water mist systems are popular but care is needed if the rooms to be protected are markedly larger than those used in water mist fire proving tests.

Several were examined, including:
fire in a work space at ground floor level,
fire in an escape stair,
fire in a vehicle under a building.

Remedial options examined.
The courtyard facade of each flat could have its fire resistance improved by any of several techniques for example:
• installation of  insulating fire curtain behind the glazing (inside the flat), operating on local heat detection within the flat. An uninsulated curtain might suffice to at least stop flames from issuing through the glazed area.
• replacement of existing glazing with fire resisting insulating glazing (REI30 minimum). Perhaps RE30 would be adequate e.g. Pyran glazing
• installation of  an external roller shutter covering both glazed and timber area if technically/economically feasible
• making the flat entrance doors also fire resisting, at least RE30 in each of the above options except the sprinkler option

My preferred option is the installation of residential sprinklers as this would avoid all the other upgrading work.apart from any work on dry risers and fire fighting lift and installing fire doors on the escape stairs, all subject to approval by building control and the local fire authority.

Conclusions
The external steelwork need not be fire protected except in a few places where direct close flame impingement could take place; residential sprinklers should be fitted throughout the building. Documentation should be prepared or updated to cover: drawings
of current space usage, fire safety management, fire safety strategy, lines of compartmentation, fire plan i.e. evacuation strategy etc.