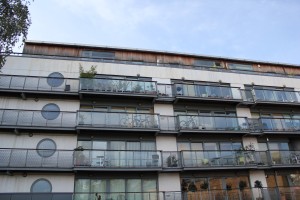 Part of the building showing cantilever balconies and, not easy to see, top storey clad in timber. 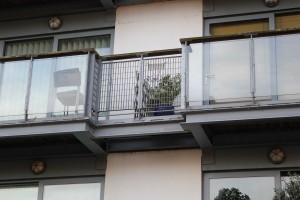 Cantilever balcony. Note longitudinal continuity in steelwork and absence of columns supporting outer edge of walkway. In fire the balcony could sag and collapse without affecting stability of whole building.

I was asked by my client to inspect and report on this existing block following comments by the local fire service. Calculations by a structural engineer assumed that the steel I-sections were exposed to the standard BS 476 fire resistance heating conditions in which the steel is totally engulfed in the fire, which may be a very severe environment if the steel is outside the fire compartment. I said that if any calculation method should be employed it should use the classic jetting flames method of Law and O’Brien and added that it was complicated. I also said that the Law work showed that if the external steel was spaced away from the facade (glazing) by at least 2/3rd of the window height then the steel would not reach approximately 550 degC, the commonly accepted ‘failure’ temperature criterion for structural steel, assuming there was no through-draught which could result in a more severe exposure (it is noted that a through-draught could occur in a flat as there is no fire resisting partition between the front and rear windows). It also assumes the fire load density does not exceed 50kg/square metre of floor area.

Having inspected the building and seen the structure of the balcony-supporting steelwork it became clear that each balcony, although long in horizontal extent, is independent of the main internal load bearing structure. Each balcony is cantilevered from the steel columns buried in the external wall, and though the connection cannot be seen there is evidence elsewhere, i.e. in the car park undercroft, that the cantilevers would have substantial end-plates bolted to the steel columns. If a balcony collapsed in a fire it would not affect the stability of the building: this is a very important conclusion and satisfies the building regulation that should a structural member be removed (as by fire) it should not have a disproportionate effect on the rest of the building structurally.

I concluded that should a fire be severe enough to cause sagging of the balcony it might form a catenary and be restrained from total collapse by non fire-affected balcony either side. Hence if a fire in a flat below a balcony became fully developed and broke the windows at front and back then the jetting flames would heat the spandrel steel beams and the steel cantilevers supporting the spandrels and they could ‘fail’ but have little effect on the rest of the building. Such a collapse could however affect the escape routes. It is of little benefit but at great cost to fire protect the structure of all the balconies.

All the flats had unenclosed balcony access at front and rear at each storey level. Three external escape stairs constructed of steel were available, and they were sensibly located: one in the centre and one at each end of the Y-shaped blocks.

Should fire occur in any flat the occupants should leave by the front or rear door and pass along the balcony to reach a stair from which they could access the safety of the courtyard. The escape stairs were the same stairs by which normal access is gained. This is good as people are familiar with them. 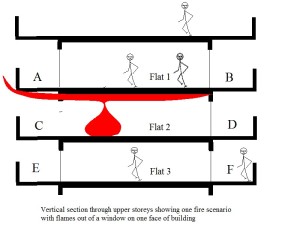 The diagram shows a simplified vertical section through three levels in a wing of the building, which I have named Flats 1 to 3. A, B… F are balconies. Note there is no internal wall between front and back – i.e. all sitting rooms are open plan. Escape depends on what stage the fire has reached. If flames are out of both windows then escape along balconies C and D may not be possible if the flat is in a dead end.

A fire in a flat could make escape along both front and rear balcony untenable at the same time in a fully developed fire, and this is the reason for recommending local fire detect and alarm where dead ends occur, but this is dependent on the unknown fire strategy. I also concluded that the timber external wall facade at the top storey did not require treatment to reduce the flame spread properties in this particular context.

In my report I strongly recommended that a holistic fire safety strategy report be prepared at the earliest opportunity and passed to the LFB for comment and approval: the LFB are the experts in fire fighting and rescue and this building strategy appeared to rely on Stay in Place which depends on the fire service.