Advice on fire protection offered by door in a hotel in the harbour, Aberystwyth.

A fire doorset had been installed by a contractor but not in accordance with BS 8214:1990. Having examined the plans I was able to argue that, in the particular planning context, the doorset need not be replaced without leading to an unacceptable risk to life.

This rundown property in a prestigious area had a single staircase and unusual long-standing arrangements in the deeds for escape through neighbouring property at upper levels. It was being completely redesigned to provide hotel accommodation for approximately 20 residents and staff and would incorporate a single staircase winding round the and lift running full height and would still use one of the upper storey escape routes. The client wanted an independent review of the fire safety strategy both to satisfy himself as the eventual Responsible Person under the Regulatory Reform (Fire Safety) Order and to assess if there were likely to be problems in getting final building control approval (interim comments had been obtained from the Approved Inspector). I inspected the site and the proposed external means of escape and commented on the architect’s stair and lift arrangement and gave the opinion that sprinklers should be installed throughout. I suggested a format for an eventual fire risk assessment and also gave guidance on the kind of document needed under new Regulation 15 of the Building Regulations 2000. Advice ongoing (January 2010) 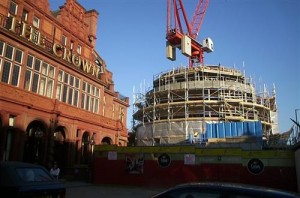 This well-known Inn is being converted and enlarged to include hotel accommodation with an atrium, a swimming pool and underground car park. Acted as fire consultant to Building Control Department to check fire safety strategy, smoke control measures, construction and commissioning of this £25m infill development in a lively urban environment, due for completion early in 2004. Responsible for giving some guidance on fire matters, checking means of escape, compartmentation, fire detection and alarms, emergency lighting and signage, cause and effect schedules, witnessing commissioning tests and verifying practical completion in terms of fire safety. Architect: Capital Architecture Ltd, Colindale, London 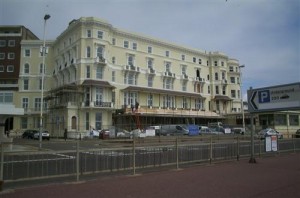 I gave advice on remedies to unventilated lobbies to refuse stores on means of escape stairs in this impressive 5-storey sea front Victorian hotel being converted into luxury apartments. The remedies were made difficult since the building is conserved and new openings in the façade are not allowed. After exploring many options, my preferred solution employed a fire rated fan and extract ducting to an ‘invisible’ vent flap in the external wall opened by a linear actuator on smoke detection.

Client: We make it happen, Hastings

I was appointed by An Bord Pleanala a) to give an opinion as to whether or not new information provided by the Applicant (information not available to the Board’s previous adviser when he advised that the appeal be dismissed) was of a substantive kind which warranted a reconsideration and possibly a change of decision, and b) to make a recommendation to the Board. The appeal concerned the means of escape from inner bedrooms and the use of fast-response sprinklers and an enhanced fire detection and alarm system as compensating features. My work required an interpretation of tenability data from residential sprinkler tests undertaken by BRE – the so-called West Yorkshire tests – on two identical maisonettes.