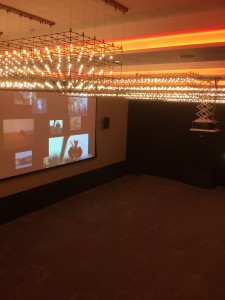 This new high specification hotel had recently been commissioned. There were three ballrooms side by side each roughly similar in size within the basement. One ballroom was nominally 17m by10m in plan area, and 6.2m high floor to ceiling. When the folding dividing walls are retracted the area becomes nominally 17m by 30m. Each ballroom could be closed off at one end by folding doors at upper level, otherwise the ballrooms communicated with a large foyer at upper level. All areas were sprinklered and had AFD, as expected.
My client, the fan supplier (not the extract system designer), was concerned that, based on cold smoke tests, smoke extract in three ballrooms differed for no obvious reason. There was a common fire rated fan but the extract performance in one of the 6m high ballrooms appeared to be less than the design extract rate of 10 air changes per hour indicated by the cold smoke test. My client wished to have a second opinion on the design and relevant regulations and codes essentially to decide if his company needed to replace the fan, or add extra extract capacity to the system or simply rebalance the extract from different areas.

I inspected the building with the client and discussed the possible bases on which the smoke extract system was designed – occupant life safety, property protection (eg to reduce smoke damage) or smoke clearance initiated by the fire service when arriving at an incident. My client did not have a copy of the fire safety strategy report (if there was one) and could not immediately state why 10 air changes an hour had been adopted. I suggested that the fire mode of operation would have been covered in the building control/fire service consultation before handover.

The client said he thought that that the fan was switched on by the fire service. This, and the 10 air changes per hour, pointed, I thought, to a smoke clearance system. He would check.

Before coming to this tentative conclusion I explained that if the system was for life safety the fan design would normally be based on a design fire and the fact that the area was sprinklered suggested that a 3MW design fire would fit. No calculation of smoke fill time was made as this was beyond my brief. The operation of sprinklers can cause down drag of smoke thus interfering with the efficacy of extraction, a well known phenomenon sometimes difficult to predict. The fact that sprinklers were installed might lead one to think that there would be manual control of the fans by the fire service.

I agreed that the measurement of extract rate through linear extract slits was difficult to accomplish without interfering with the ceiling to gain access to the supply ductwork where a pitot tube could be installed to measure pressure drop and hence air flow.
I explained the inadequacies of a cold smoke test. If there was any doubt as to the efficacy of extraction a hot smoke test should be conducted and hence a comparison of RSET(required safe escape time) and ASET(available safe escape time) could be made as detailed in BS 7974. A hot smoke test is currently recommended and this is covered in BRE report BR 368. The nature of this test was explained to the client. The life safety aim would be to keep the temperature of the smoke layer below 200 degC and not lower than 3m above floor level while escape proceeded. We also discussed the need for inlet air to replace smoke extracted and it appeared that no provision had been made in the system design: however if the system was to be managed by the fire service then the brigade could open doors manually before switching on the fan.
I prepared a brief report on my findings.