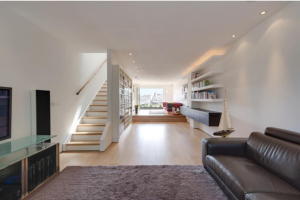 My client, the owner of this single staircase house, had made structural alterations to the layout making it open plan but apparently had not obtained building control approval but started on the process. He now wished to sell the property and needed to regularise the position by making a final submission to building control. I inspected the building and recorded the lack of compliance with the guidance in ADB and other codes, and prepared a report in which some remedial measures were suggested. in a small compact house where space and aesthetics are at a premium it is not easy to convince the client that a partition or fire curtains are needed to separate the escape route from the accommodation and that other passive/active fire precautions will not work, technically or financially. This project typifies the difficulties of trying to rationalise the fire safety design of a completed project which goes against current regulatory guidance, and makes it very difficult for the fire safety engineer and building control authority.