This multi storey building was being converted into flats. One of the uppermost flats was beyond reach by a normal fire service ladder 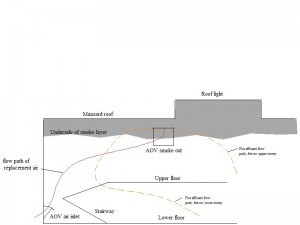 access and within that 2-storey flat (duplex) there was no protection to the single escape stair. Fortunately all bedrooms were on the lower storey and could be regarded as low risk in relation to the open plan upper storey. The problem was to avoid the installation of structural separation along the escape route to the final exit at lower storey level. The client had considered having smoke flow patterns modelled by a fire consultancy specialising in CFD  fire modelling. I inspected the building and discussed several options with the builders and was able to suggest a remedy of passive and active fire precautions which were acceptable both by the client and the building control authority, and this saved the client more than £10k in modelling fees.