Data on fire performance of a wide variety of building materials and constructions are needed to show compliance with regulatory life safety targets set down in, for instance, the government’s Approved Document B ‘Fire Safety’ and in British and European Standards and Codes of practice, notably BS 9999. Because natural (real) fires are so varied in terms of combustion gas temperature, thermal radiation intensity and duration, it has been the practice to idealise the real fire as a range of standard fires so that products tested in the standard environments may be compared, ranked in performance, and listed in regulatory documents.

So, what are the standard fires? Test standards deal with two distinct fire regimes; one before the fire has reached flashover called ‘reaction to fire’, the other dealing with post-flashover conditions where, typically, combustion gas temperatures have exceeded 650 degC and it is here that ‘fire resistance’ becomes important.

These tests measure properties such as ignitability, combustibility, rate of heat release, smoke production, toxicity of smoke, surface spread of flame, production of flaming droplets, thermal radiation intensity. These tests may be done on small specimens of material or complete large assemblies of materials where, in the latter case, the behaviour of joints is also examined.

These are made on full scale specimens of structural elements using large enclosed furnaces in which the combustion gas temperature is controlled to follow a standard time-temperature curve (e.g. ISO 834) reaching approximately 1100degC at one hour. Specimens are floors, walls, beams, columns, ceilings, ducting, partitions, doors, fire curtains, shutters, fire-rated glass, intumescent seals, in fact any construction forming a separating function and/or a load bearing function.
For example a wall furnace allows a 3m square wall specimen to be tested in a structurally loaded or unloaded condition for several hours, although the maximum fire resistance required under building regs is 90 minutes. The main objective in fire resistance tests is to measure and compare the ability of the specimen to resist collapse under the structural live and dead loading, prevent passage of flames, and prevent high temperatures developing on the unexposed face. Fire resistance is expressed as, for example, 60 minutes fire resistance.

A common misconception is that a 60 minute rated element will resist a real fire of 60 minutes duration; every real fire is different in growth, steady state and decay phase. The real fire severity after flashover in an enclosure such as a room will depend on the amount and disposition of the combustibles, the oxygen supply governed by the ventilation openings and the thermal properties of the bounding walls and ceiling. In real fire severity tests in a compartment (3m high by 6m wide by 23m deep) designed by the author and conducted at the Cardington test facility of the Fire Research Station, BRE, a maximum compartment gas temperature of 1240degC was recorded. See photo.

Sometimes it is possible to make an assessment of fire resistance for a construction that is larger or different in some way from the as-tested specimen and this is termed an ‘Extended Application’. BSI and other national standards bodies in the EU are attempting to provide simple guidance for Extended Applications. The author was involved in this work while at the BRE and has since made assessments of the fire resistance of large sandwich panel assemblies in which the fire behaviour of the core material, panel jointing and the phenomenon of thermal bowing become especially important. 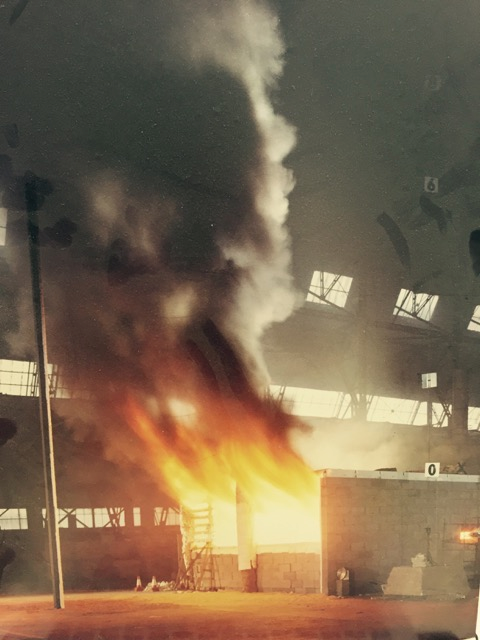